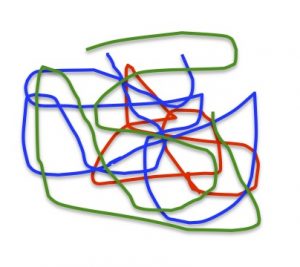 The Hidden Power of Words series takes a look at the language origins of frequently used words across the subjects of organizing, time management and productivity. There’s quite a lot of hidden history (and fascinating order) when it comes to the words we use in today’s day and age!

an untidy collection or pile of things

Common Phrases and Usage in American English: “I jumbled up all the rubber bands that were on the desk.” “The clothes were all a jumble,” “Did you finish that word jumble yet? It’s my turn to use the puzzle book!”

My Take on the Definition and Guess as to the Origin:

The word ‘jumble’ is a wonderfully simple and yet descriptive phrase. I don’t know about you, but hearing the word just makes me think of a pile of something that is amiss. It’s almost as if the letters in the word itself don’t seem to match or compliment each other in the first place. Now, as for the origins of this word, I’m flat out stumped. ‘Jumble’ doesn’t bring to mind any language with which I’m familiar, not even my usual guesses from Latin or Middle or Old English. Just where is ‘jumble’ from?

Drumroll Please (aka The Big Reveal):

Hmm, well that origin came up a bit short. Let’s now turn to the Online Etymology Dictionary for further assistance.

Interesting, we’ve now jumped from an “untidy collection” to a “confused mixture.” Of course we’re not going to stop here. It’s time to take a look at the verb sense of the word.

1520s, originally “to move confusedly,” perhaps coined on model of stumble, tumble, etc. In 17c., it was yet another euphemism for “have sex with” (a sense first attested 1580s). Meaning “mix or confuse” is from 1540s. Related: Jumbled; jumbling.

What an interesting word origin! ‘Jumble’ certainly has a lot going for it when it comes to movement and motion. Truly, when different items are randomly thrown together, it can be hard work figuring out where one piece ends and where one piece begins. A confusion of items, mixtures, movement and motion, be it a mass of papers, a stack of clutter, or a pile of dirty clothes waiting to be washed. As for the use of ‘jumble’ as a euphemism, well, you can use your imagination.

Now to you…how did you fare in your guesses of the word origins of ‘jumble?’ Were you surprised? Join in the conversation and leave a comment below!