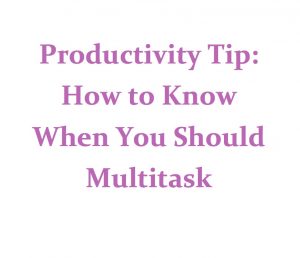 Have you ever wondered if there’s any times when it is perfectly okay to do many different things simultaneously?

There’s got to be at least a few situations when multitasking might actually be worth your while!

In this post I offer a few ways to pinpoint the best circumstances under which to multitask.

Your work is limited to only two tasks.

Multitasking doesn’t have to involve large numbers of tasks; one task plus another equals two tasks after all!

While it’s often best to work on one task at any given time, two tasks can be properly managed if they meet the following criteria…

One of your tasks has specific time frame or timer attached to it.

Multitasking can be effective when one of the tasks has a specific time frame associated around it. This might be something as simple as waiting for a load of laundry to finish, backing up your computer files, or waiting for a postponed meeting to begin in a couple of hours. The idea here is that the time frame doesn’t unnecessarily drag out for a long period of time; it’s a relatively short amount of time when all is said and done.

One of your tasks is self-contained and doesn’t require baby-sitting.

Make sure one of the tasks you choose is self-contained. That is, you don’t need to physically be present for the task to be completed, all you need to do is set the task in motion. For example, you could set your computer files to back up and tend to another task at the office, perhaps filing some papers, or you could also place a phone call to a friend to get some information about an upcoming party you’re throwing, and then sit down to brainstorm some party ideas.

Your second task is also contained or clearly structured.

While you’re waiting for the first task to complete or finish, you should preferably work on something that takes the same amount of time to complete as the first task or is otherwise clearly defined in some way. Take a look at your to-do list or tasks for the day and see where you could make a dent in this short period of time. You could structure or define a task by any type of unit you choose: papers filed, pages read, a corner or area of your home or office to clean, emails answered and so on and so forth. Just make sure you contain your work so you have enough energy and wherewithal to check up on your first task when it is completed.

How about you? Where do you think you could multitask in your schedule? What two tasks seem like they are a perfect fit for the type of multitasking described above? Join in the conversation and leave a comment below!

Do you want to improve your productivity levels today and everyday so you can get...

Do you want to organize your garage at home? Are you looking for tips on...

Have you ever wondered about the importance of time management? Are you interested in honing...

Do you want to get things done at home, work, or school? Are you tired...

Do you want to organize a linen closet in your house or apartment? Are you...

Do you want to balance your busy schedule? Are you looking for some simple ways...

Are you looking for a collection of working from home tips and tricks? Maybe you find...

Are you looking to organize mail at home or in the office? Do you want...