a substance, such as mud or dust, that soils someone or something 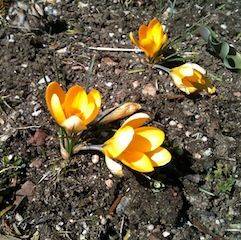 Common Phrases and Usage in American English: “We need to buy more dirt for our flower beds.” “This floor is so dirty! I think I’ll have to wash it twice in order for it to look remotely clean.”

My Take on the Definition and Guess as to the Origin: I’m going to guess ‘dirt’ has to do with something with rocks and stones…where dirt comes from, right?

Hmm, interesting. I wonder though if other languages have a similar origin for the word ‘dirt,’ or if the idea refers to something that is not liked or that one would want to shy away from? Let’s now check the origins of ‘dirt’ in one of my favorite references, the Online Etymology Dictionary:

What a very interesting set of origins! It looks like I was correct in my guess. It’s amazing how ‘dirt’ has such fierce origins in the sense of something no one would want or care to touch. No wonder there is such a striking difference when it comes to all things dirty versus clean.

Now to you…were you surprised by the origins of the word,‘dirt’? Join in the conversation and leave a comment below!